Top 5 Retirement Destinations for Any Budget 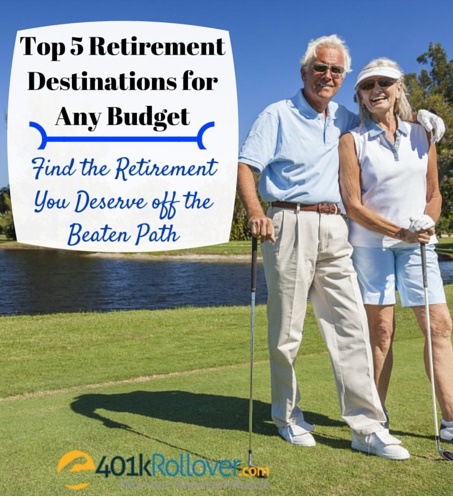 These five retirement destinations have some of the lowest cost of living and best healthcare around, which will provide you with the retirement you deserve?

The Bureau of Labor Statistics reported that prices in the United States increased just 0.7% over the year to December 2015. What it didn’t report was that prices for seniors increased at a much faster pace. Prices for shelter and medical services, a big chunk of retirement spending, jumped more than 3% and the cost of hospital services surged by 4.2% last year.

While your spending changes in retirement, down by a third at 85 years old, many retirees will still risk outliving their savings. Against this risk of financial ruin and rising costs for retirees, many are finding the retirement of their dreams outside our borders.

5 Best Retirement Destinations on a Budget

How much money you’ll need to meet your retirement goals depends largely on where you live. Retiring in New York, one of the most expensive cities on the planet, is out of the question for many retirees. The way inflation on medical care and other services is going, this may soon be true for any place in the United States.

For a lot of retirees, the only options are going to be scraping by in the U.S. or getting the retirement they deserve outside the red, white and blue.

Ecuador perennially tops the list of retirement destinations for its year-round climate and ease of buying or renting. Its long-time popularity makes it easy to find other expat and U.S. retiree communities, especially in Cuenca and Quito. The cost of living is extremely low but still bested by other destinations like Nicaragua and Vietnam.

Panama follows closely on the list and is one of the most developed among other Latin American retirement destinations. Panama and Ecuador both use the U.S. dollar, a nice familiarity for many retirees and making money exchange unnecessary. On the downside, you won’t benefit when the dollar rises against other currencies as it has done over the last year.

Malaysia ranks fourth on the list of retirement destinations and the first among Asian countries. As with most of the retirement destinations on the list, your cost of living can fall dramatically if you live just a few miles outside the larger metropolitan areas but even prices within the city are generally low. One of the few complaints is the high tax levied on alcohol, one of the highest in the world, though the overall cost of living is still reasonable.

Spain is sixth on the retirement destinations list but the first among European countries. The country was a favorite of Ernest Hemingway for its culture and amazing climate in the southern region. It will still be relatively more expensive compared to non-European destinations but much cheaper than most other developed economies.

Colombia may be the hidden gem of retirement destinations with its low cost-of-living and year-round spring-like weather. The country has several large cities with populations over one million and progressive amenities you would expect in the United States. The temperate weather in much of the country means you likely won’t need to spend on heating or cooling. The country still suffers from the stigma of insecurity from its past but most expats report feeling just as safe as they feel in the United States.

No places in Africa or the Middle East ranked among the top 25 retirement destinations. The cost of living may be much lower around these regions but other services and safety could be an issue. Still, for those that like a little more ruggedness in their retirement, going off the beaten path to these unlisted retirement destinations may be part of the fun.

Many of these retirement destinations are becoming so popular with American expats that whole communities are being founded and it’s just like living in the States. Hospitals and public services are hiring English-speaking staff to accommodate the arrival of thousands of retirees. You may still have to get used to a few cultural differences, like a more relaxed way of life, but these five destinations can provide the retirement you deserve at a fraction of the cost.