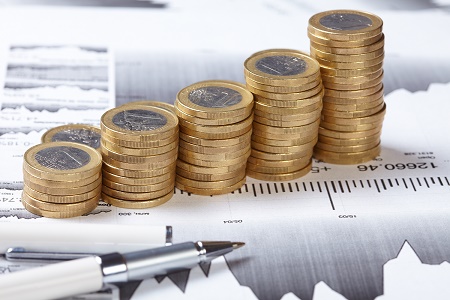 The seven-year bull market in stocks is cracking and the major theme of 2016 will be an investor exodus to safety and return in other assets. Savvy investors will see five dynamics working together to send gold prices higher as other asset values sink.

Some of these gold catalysts are already in full force with U.S. investor demand increasing 207% in the third quarter and central banks adding to their holdings for 19 consecutive months, pushing gold prices up 5.5% in January of 2016.

Other catalysts are building and could return gold prices to highs within the year. Gold prices doubled in just two years to mid-2011 before anyone knew what was happening. That same growth and faster could happen again in the next couple of years.

Stocks are Crashing, is it 2008 all over Again?

The stock market finished 2015 lower by 3% and started 2016 by tumbling another 8% before yet more money printing from Japan coerced a partial rebound. The central banks of the world have artificially supported stock prices for more than six years, printing money for bailouts and stimulus.

The world’s largest central bank, the U.S. Federal Reserve, has stopped its stimulus program and is now raising interest rates to slow the economy. One look at a comparison of the S&P 500 and the Fed’s monetary stimulus through its balance sheet proves a disturbing relationship. What happens to stocks now that the Fed has stopped boosting prices? 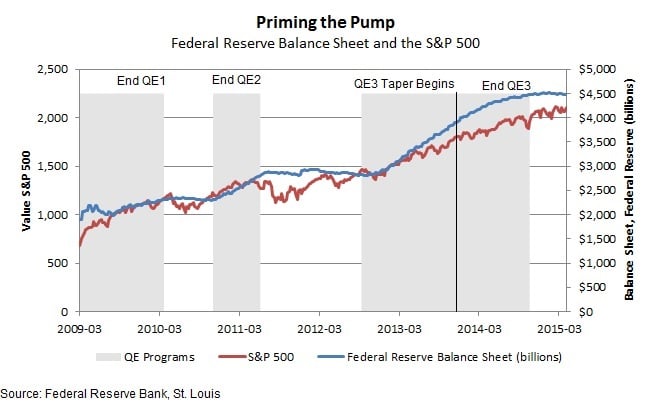 In fact, one measure of risk in stocks has already shown the pain to come. The VIX volatility index, also called the Market’s Fear Indicator, has nearly doubled to start the year and is well over its 2015 average.

The relationship between gold and market volatility changes depending on what period is measured. Over the last year, the relationship of daily returns has been just 6% on generally low volatility and a directionless gold market. Gold prices have increased when the market wobbles but not by much because investors were certain the government would come to the rescue with more stimulus.

The relationship comes back to life though when market volatility jumps and investors run for safety in the yellow metal. The relationship between gold prices and volatility reached 79% in 2002 and 24% in the five months leading to the shutdown of the U.S. government in 2011.

Rising interest rates and sluggish global economic growth will take the steam out of stock market gains in 2016. With the Federal Reserve easing off the gas of monetary stimulus, the stock market won’t have the support it’s enjoyed for more than six years. Volatility will return and investors will rush back into gold for safety.

Americans are Rushing Back to Gold for Investment Safety

According to the World Gold Council, investor demand surged 27% in the third quarter of 2015 from the prior year. Bar and coin demand in the United States jumped 207% to 33 tons, the highest in five years. Sales of U.S. Mint Eagles reached their highest level since 2010. 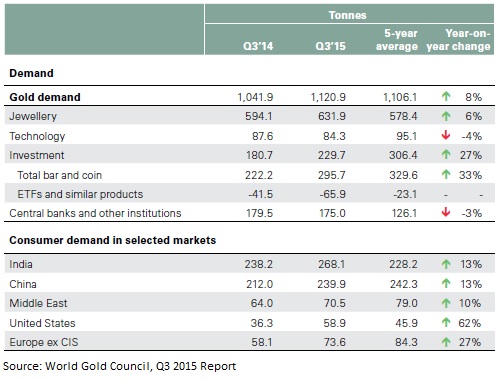 Overall gold demand jumped 8% with double-digit demand growth in every region. In the United States, consumers rushed to the safety of gold against weak economic growth and falling stock prices.

Central banks around the world have been net buyers of gold for 19 consecutive months as countries try to protect their reserves against falling currencies relative to the dollar. Purchases by central banks of nearly 175 tons in the third quarter nearly reached record highs set last year. The same central bankers that are pushing monetary stimulus and money printing understand the longer-term effect of these programs on inflation and the value of fiat currencies. They’re stocking up on gold now to protect their economies when the value of paper money evaporates.

Gold Buying is Surging and Nobody Wants to Sell Their Gold

When most people look at gold supply, they immediately think of mining but the annual addition to supply from production is only about 1.5% of the total supply. The real supply of gold comes from recycling and those willing to sell their own gold.

And there’s good reason to believe that supply isn’t going to be available to meet demand.

The amount of gold used in jewelry increases fairly consistently. People don’t trade or sell their heirloom gold unless they’re in dire need so there isn’t usually much recycled supply from this group. Double-digit demand growth from consumers means a shortage of this recycled supply over the next year.

Central banks certainly won’t be selling their gold anytime soon. Bankers don’t want to hold dollars anymore because of the nation’s untenable debt situation and the potential for the Chinese Yuan to replace it as a reserve currency. The only store of value that will protect reserves from dropping commodity prices and their own weak currencies is gold.

IRA Gold Holds its Value against the Coming Wave of Inflation

Inflation has already come roaring back in many parts of the world with prices higher by 15% in Russia and higher by 10% in Brazil from the year to December. Advanced economies like the United States and Europe have been given a temporary reprieve due to falling oil prices.

Because advanced economies use much more oil than they produce, the 70% plunge in the price of oil has hidden price increases in other products. While the Bureau of Labor Statistics reported prices increased just 0.7% in the year to December 2015, prices for most household spending jumped. Services excluding energy were higher by 2.9% and the cost of hospital services jumped by 4.2% over the year.

Inflation is about to get a lot worse with International Monetary Fund estimates that put the developed world on the verge of a major cycle of higher prices.

While plunging energy prices have undermined actual inflation reporting over the last year, the opposite will be true in 2016 as oil prices increase. Crude production is forecast to decrease and energy prices could bounce higher. This could make for a surprise increase in the pace of inflation, forcing central bankers to raise interest rates to slow pricing pressures.

Of course, higher rates would only force the economy into a recession and prices would stay stubbornly high.

Gold has been the only real protection against inflation for decades. Over the last ten years, an investment in gold has beaten inflation by 12% annually and has bested the return on stocks by 50% over the period.

When the stock market crashed in 2008, it was because investors realized all the paper investments created by banks were worthless. The alphabet soup of investments like ABS, CDS and MBS ultimately had no value beyond the paper on which they were printed.

Gold and other hard assets have real value because they have real physical demand. Precious metals are real assets you can touch and that act as a store of value. Over the last 50 years, the stock market has fallen 10% more than 20 times because investors decided financial assets were worth much less than they had before. Stock prices have crashed more than 50% on two occasions since the year 2000 simply because investors stopped believing in the value of financial assets.

This disbelief in the value of financial assets will happen again. At nearly seven years, the bull run in stocks is already longer than the average over the last 30 years. Higher interest rates and soaring inflation will likely be the impetus that sends markets scrambling again. When this happens, only gold and other precious metals will retain their value and actually increase as investors rush to safety.