Buyer Beware of 1.5oz Polar Bear and Cub Coin and other Shams

In recent years 1.5 ounce coins from reputable mints have become wildly popular leading to some shady dealers to knock clients pocketbooks by charging over $60 for a coin that can be obtained by a reputable exchange for close to $45. 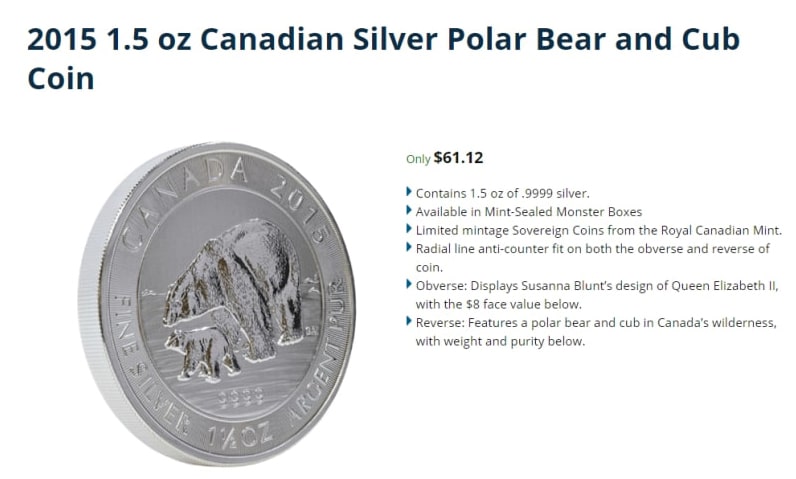 How do these shameless dealers justify their underhanded scheme? By stating that the coins are hard to come by. That there are limited quantities available and with high demand it drives prices up in the secondary market.

Are 1.5 ounce silver coins hard to come by? Are they really that scarce?

We’ll look at the 1oz American Silver Eagle and Canadian Maple Leafs to make a comparison. Both the Silver Eagle and Maple Leafs have been minted annually since their inception in 1986 and 1988 respectively. Most 1.5 ounce coins however are not minted on an annual basis but are featured in a specialized series as seen above. And although it is true that they are released in a limited mintage… I don’t believe that warrants an exorbitant premium.

Let’s look at the next statement.

There are limited quantities available and with demand being so high it drives prices up in the secondary market.

Now, we’ve already addressed that yes, most 1.5 ounce coins are released in finite quantities… but does that drive prices up in the secondary market?

Well, yes and no.

Just like with any commodity… the less there is of something that’s in high demand the higher the price it can fetch. Being that 1.5 ounce coins frequently have a higher purity (.9999) than the Silver American Eagle at .999 they are often coveted for retirement accounts and are stashed away for extended periods of time. But again… does this warrant unscrupulous dealers charging heavy handed commissions when there IS plenty of inventory on the market as we see now? I don’t think so.

So what’s all the hype about anyways? Why have 1.5 ounce coins become so popular these last few years?

One of the main reasons is investors attempting to avoid the explosion of Chinese counterfeits on the market. For example… in the last few years there has been an epidemic in fake Silver Eagles flooding the market. These counterfeiters have become so sophisticated that the bogus Silver Eagles are oftentimes provided in US Mint packaging!

Here’s an example of a fake Silver American Eagle.

To avoid the “counterfeit catastrophe” many prudent investors have sought out certain Royal Canadian Mint 1.5 ounce coins which are designed with radial line anti-counterfeit technology built right into the coin.

Another long term advantage is the fact that 1.5 ounce coins are typically minted in limited quantities. And overtime this tends to lead to higher premiums.

However, this DOES NOT EXCUSE unethical dealers from gouging novice investors.

As an example let’s take the generic Silver American Eagle from 1996 boasting a mintage of only 3,603,386 – the lowest of any year. Due to its scarcity it’s value has skyrocketed over the years as seen below.

Below is a photo of the 1.5 ounce Royal Canadian Mint Polar Bear and Cub coin. Because of very high demand and low quantities on the market some dealers are selling them on Amazon and Ebay for up to (and at times over) $80.  Collectors and investors should continue their search before paying those amounts as we were able to find them around $45 US Dollars. Keep in mind there may be a slight premium for monster boxes when they can be found. 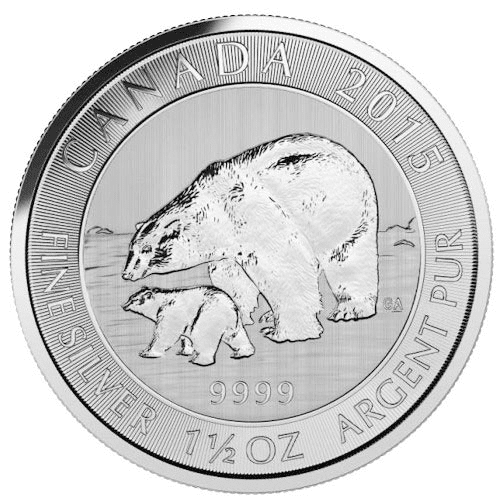 To wrap this up…

Please don’t get caught with your pants down. Make sure you’re working with a reputable dealer and not a fly by night operator looking to take advantage of you. There are countless silver coins to choose from and making the right choice could mean 10’s of thousands of dollars to you over the next few years.